The sculptures displayed in Katohia He Wai Moou, Katohia He Wai Mooku are on long term loan from the Waikato River Authority and relate to historic sites along the Waikato awa. Rich with symbolism, the exhibition tracks the length of Aotearoa New Zealand’s largest river from its beginnings at Mount Ruapehu to the powerful currents rushing past the Museum, and onwards to the sea at Te Puuaha o Waikato (Port Waikato). 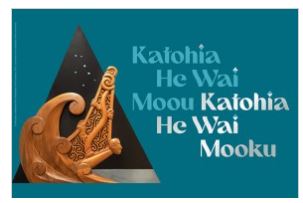