Hamilton’s cycling and walking routes have been developed over many years. As a result Hamilton City’s extensive network of walking and cycling routes across parks, through gullies, alongside the Waikato River and on roads is used daily by commuters, families and people just interested in seeing where a path will take them.

The cycling and walking map shows all of the routes currently available in Hamilton. The map key shows where routes can be found on both parks and roads, and that while some routes are for shared use (walking and cycling) others are for walking or cycling alone.

The Hamilton Bike Map can be downloaded as a PDF for printing at this link​.  It is availlable as a fold-up Z-Card from bike shops, i-SITE and council facilities around the city.

On one side, the Hamilton-wide map shows the bike lanes, paths and other infrastructure across the city. Then the other side has maps of three areas to explore off road - The Pukete Bridges Loop, The Mangaiti Gully and Tauhara Park, and The River and Sandford Park.

Hamilton's gullies and parkland provide great opportunities to escape busy city life. The riverside routes are for both walkers and cyclists and cycling is also allowed on designated routes across some parks. Cyclists and walkers are urged to share the routes with care by having consideration for each other. Walkers are urged to keep to one side of the routes, especially on corners so cyclists can pass safely. Cyclists are reminded that all park routes intended for cycling are for recreational cycling only, and are urged to give ample friendly warning when approaching walkers from behind. Racing, mountain biking and any cycling involving speed on these routes is not permitted.

For a diverse walking route right in the city centre head over to Hamilton Lake Domain. The walk around the edge of Hamilton Lake (Rotoroa) covers 3.8 kilometers and winds through natural lakeside vegetation, past playgrounds and grassed parkland as well as the Verandah Cafe which is the perfect place to relax with a coffee after some exercise. Note that cycling is not permitted on the boardwalk section of the Lake walkway.

The Western Rail Trail Biking Path is a 2.7km off-road shared path which will utilise the existing rail corridor to connect Hamilton’s southwestern suburbs with the CBD. Suitable for children, families, commuters and recreational bikers alike, the Western Rail Trail will provide a fun and easy way to get active.​ The route will travel the rail corridor from Kahikatea Drive, around the west of Lake Rotoroa, to Ward Park and the CBD. This location has been chosen as it provides connection between Hamilton’s southwest suburbs and the city centre, Hamilton Girls High School and Wintec City Campus.​

Conveniently located at Pukete Farm Park, it is a great for riders looking for something close to the city, cramming lots of track into a relatively small, centralised area. The largely flat track is surrounded by native tree plantings. Its easy contour is suitable for beginners and families as well as more advanced riders who will appreciate the track’s tight twists and turns, table top jump and the more rugged northern corner.  Grade 2-3.

Pukete Farm Park links with other nearby cycling tracks such as Te Awa – The Great New Zealand River Ride and the shared Hamilton City River Rides and Walks.

Always walk or cycle with others. Hamilton's wonderful river and gully routes are best shared with friends. Organise a group of friends to go walking or cycling and check out the sights together. Some of the walking and cycling routes share or cross roadways. Be careful when approaching or using these roadways - look out for motor vehicles and be prepared to give way at any time. Cyclists are advised to always wear a helmet.

Share with Care signs have been put in place on the Waikato River routes. These signs identify convenient circuits using the traffic bridges and give information on entry and exit points, route distances, facilities and points of interest along the routes. Cyclists are advised that there are short sections of the riverbank routes where dismounting and proceeding on foot is recommended. These sections can be seen on the map and are as follows: 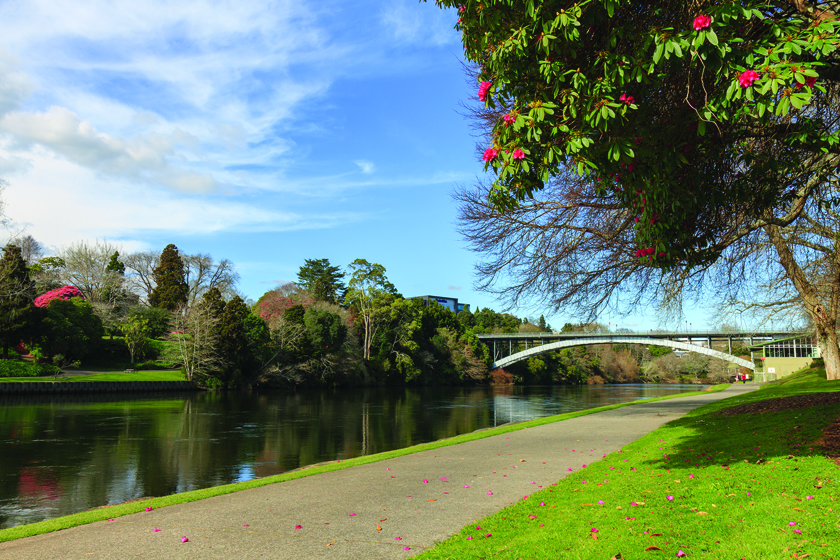